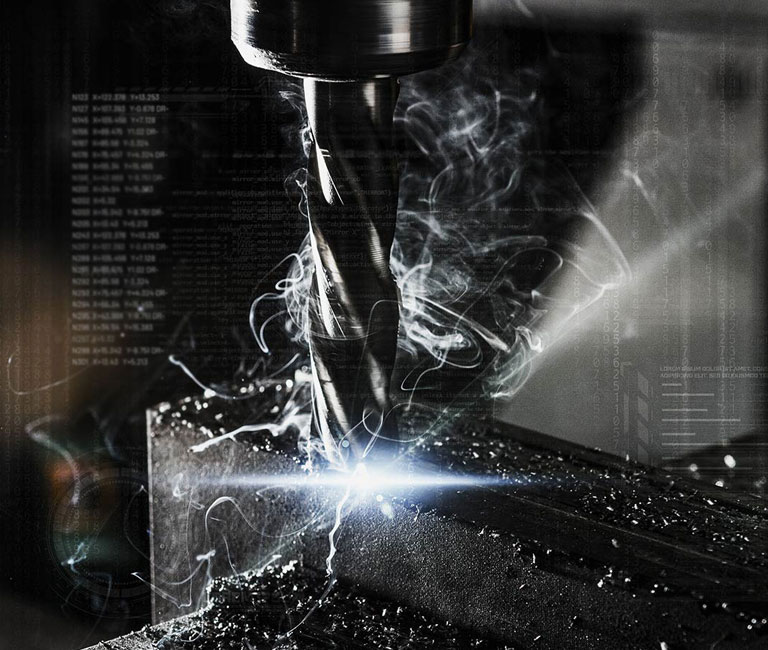 Extended machining reports include additional information in tabular form as a TXT or EXCEL file, HTML or PDF. Minimum/maximum tool overhang, additional operation numbering, renaming, wear and tear, data export to ERP or PLM system are some of the additional requirements we conduct in such projects. The ability to present this data on personalised 2D/3D drawings/documentation enables the elimination of paper documentation from the company's documentation workflow. 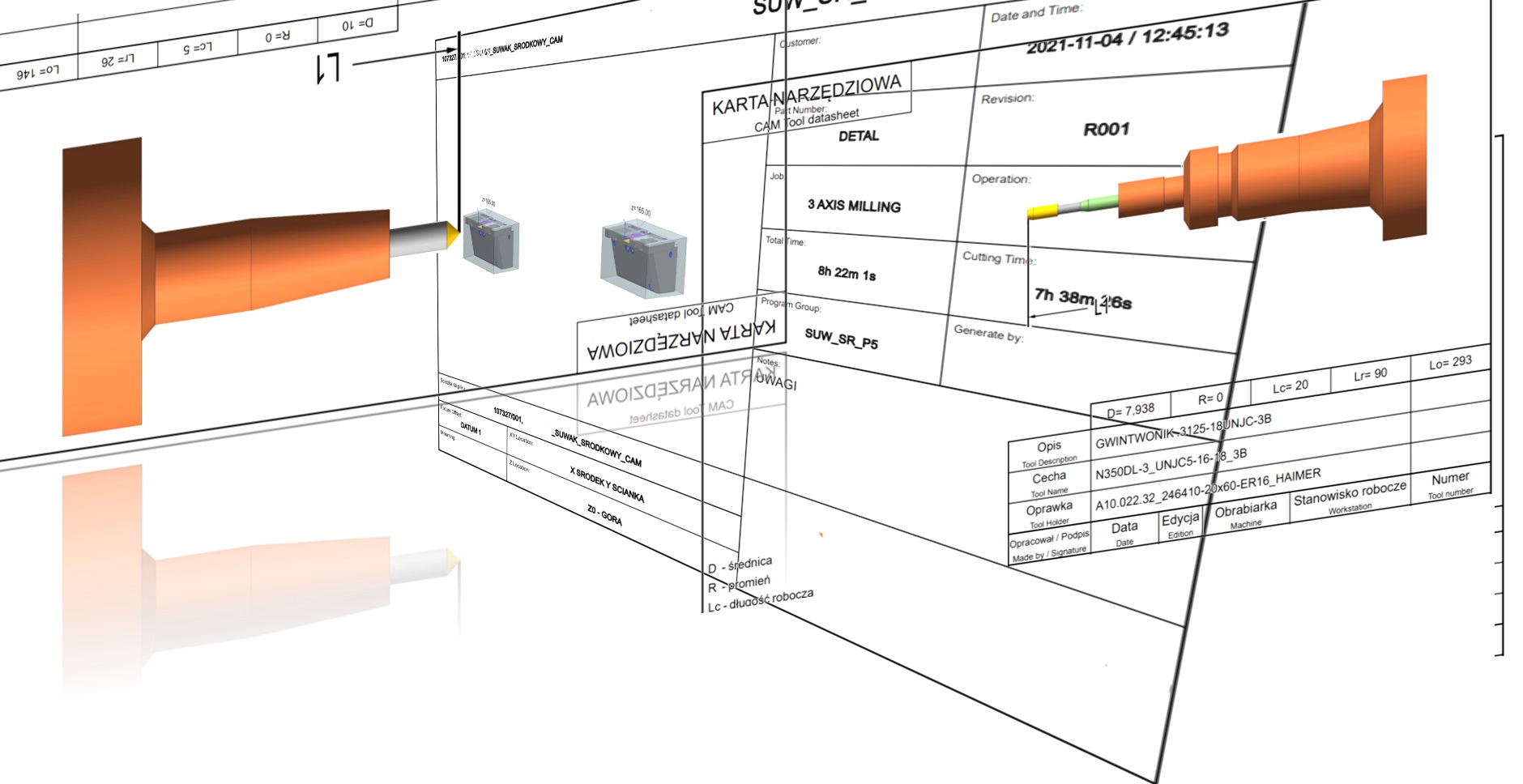 Data presentation
The possibility of presenting these data on personalised 2D/3D drawings/documentation enables controlling the workload of employees, tools, machines and transfer of these data to the DNC or PLM system. With such assumptions, it is possible to completely eliminate 2D paper documentation and move to the circulation of documentation compliant with Industry 4.0 standards.

The NX RAPID CAD module is an original CAMdivision package extending the NX CAD and NX DRAFTING applications with additional functionalities and fully integrated with them. The NX RAPID CAD module includes operations facilitating work with single parts, complete finished assemblies and flat documentation. The set of functionalities included in NX RAPID CAD was selected on the basis of the experience of our technical department as well as the suggestions of NX software users.

NX Rapid MOLD is an additional package of configured NX Mold Wizard bases and tools supporting work in NX, which contains a number of start-up settings facilitating work according to standards in a given company. Thanks to its structure, it allows to maintain the consistency of data between all the constructors, as everyone uses the same configuration and works in a repeatable way. Thanks to this, another constructor can quickly take over work in order to continue it.

Key features
Exemplary features NX Rapid MOLD reduces the time required to construct a mould by an average of 30%, and in some cases by as much as 50% compared to NX Mold Wizard alone.

NX Rapid PROGRESSIVE is an add-in for the NX Progressive Die Wizard or NX Progressive Design applications. It contains a number of configured libraries compliant with the current practice used in the design of progressive and single-acting dies. Proper settings guarantee correct work and fast tool building.

Thanks to a large number of variants it is possible to build a tool with any number of plates. Currently the configuration is based on FIBRO, MXnorm and PROPLASTICA (formerly FCPK Bytow) catalogues. 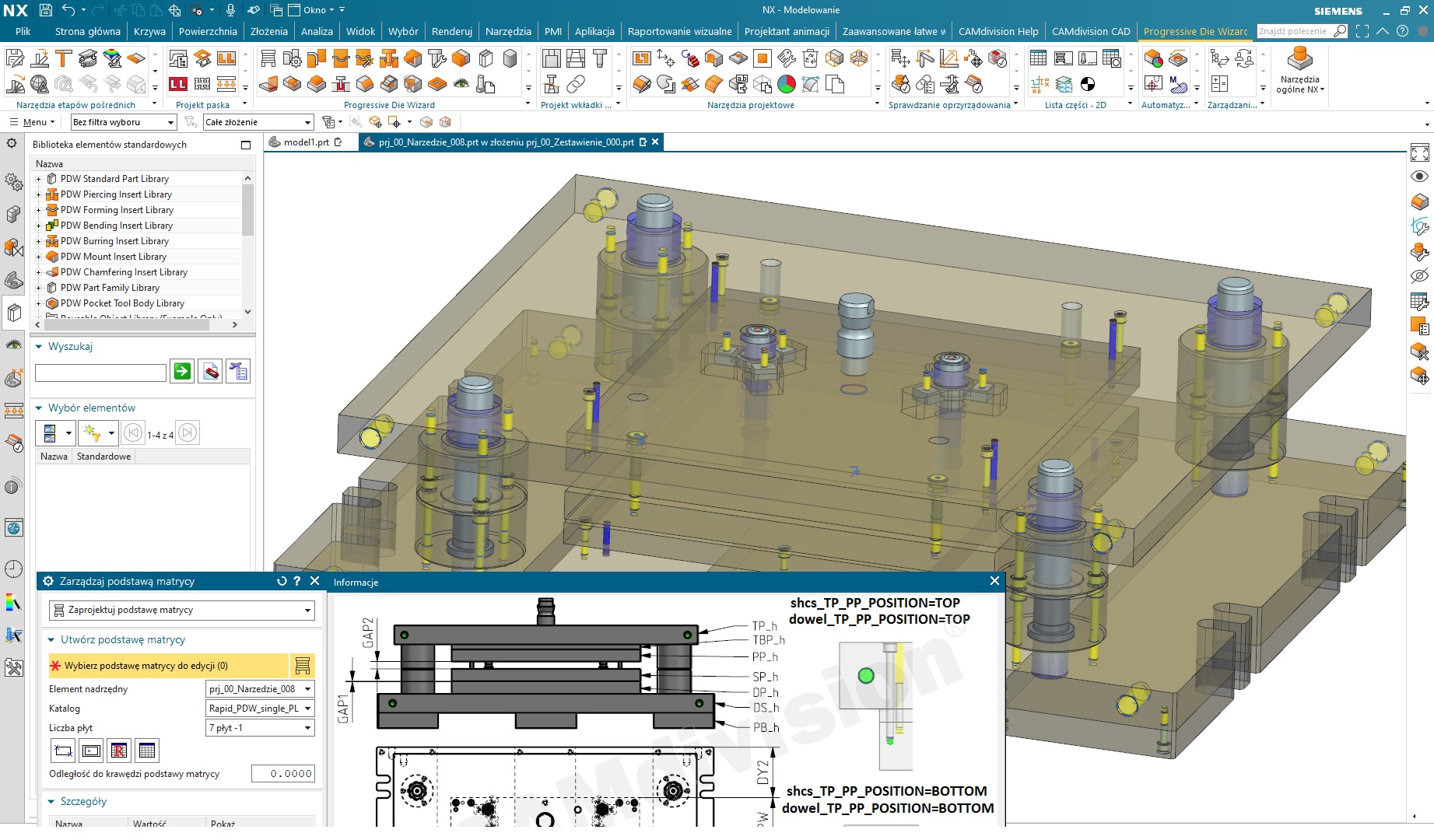 Content of NX configurations for single and multi-taper dies:

Rapid EDW is an add-on for the NX Electrode Design application. It contains personalized settings that maximally accelerate the creation of electrodes and documentation.

Every solution is possible
You just need a proper expert team

The CAMdivision team is a group of specialists who will transform each order for additional configuration of the NX CAD/CAM environment into a fully efficient system with post-processors and virtual machines implemented at the highest level. We create original applications, the implementation of which is performed individually for a specific customer on the basis of precise guidelines and according to individual preferences resulting from the specificity of production.

NX CAD/CAM & Teamcenter offer the possibility of extending their functionality, which the CAMdivision team uses in every implementation. Post-processors, virtual machines, additional applications, macros and specialised CAD/CAM modules – all these require the skilled use of a particular programming language when preparing the implementation for the customer. 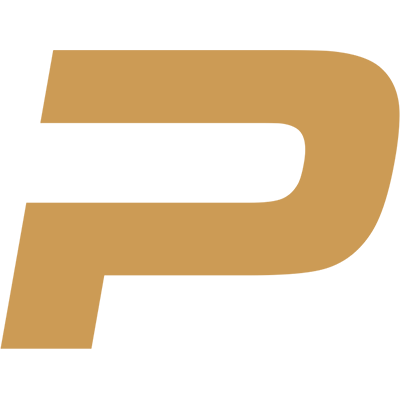 Technical inquiry
Ask for a complex solutionIf you are looking for a post-processor for a specific machine type, please fill in the short contact form. All we need is your basic data, the type of your machine and the type of machine kinematics. We will contact you with details and you will quickly receive an offer for the post-processor in question, together with its implementation.

Contact us
We will Prepare You an offerYou can also call or e-mail us to ask about the post-processor. We will discuss the type of machine and your technical requirements or ask you for details by email. Next, we will send you an offer for a post-processor for your machine.